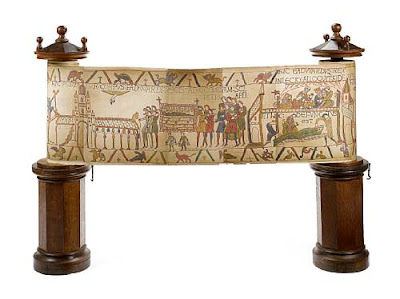 A very rare full size replica of the Bayeux Tapestry photographed by Joseph Cundall 1874
Joseph Cundall's full size photographic panorama of the Bayeux Tapestry, with its linen backing, hand coloured by students from the School of Art, London (now the Royal College of Art). This is the largest photographic panorama made in the nineteenth century, just over 226 feet in length. It is probably still the largest photographic panorama ever made. Just six copies were made and published by the Arundel Society in 1874 using the Woodbury process, and offered for sale at the massive price of £216.00 each. It is mounted on its original oak Arts and Crafts stands, 55in (140cm) high
Estimate: £5,000 - 8,000

I will not bore you too much today with the ins and outs of employing local labour, or the closing of the windows and doors, slightly eralier than normal, to stop too many mosquitos entering and the spray around my feet of some toxic kind, all to try and get a few minutes to write a new posting for you. Not so easy as well because I still have not got my vision sorted, still if i make a load of spelling mistakes i will try to clear them with the spell check.
I am sure that any one having read a reasonable amount of my blog will be aware of my association with Michael Bennett-Levy, we have worked together for many years and i have watched is collective habit grow at great speed. he has an amzing knack of consuming information and being able to then put it all together to track a history of a particular piece of early technology. i n his collection there are no great retrictions brought to bare by taste or excelence of manufacture, he sees the skill of the inventor as that of the ideas person and not the subsequent manufacturing of an item, thus a simple battered typewriter can be an element of joy to his eyes, especially if it is the earliest that he has held in his hands, it is fairly sure to be the earliest any one has knowingly touched as a type writer if he has had to look up in old catalogues and sales records to make sure that what he has just bought is in fact a type writer.
At the end of the month bonhams will be putting up the vast majority of Michaels stock, it may be called a collection but Michael will always tell anyone entering his house that all is for sale, so i reckon it is all stock, now being sold for Michael to restart another chapter in his career which will be started in France. Michael's sale will hold most spell bound, the depth of its quality and the spread of its fields, ranging from the Clive Sinclair watch, computer and C5 to the great Scottish poet, Robert Burn's, Masonic Apron 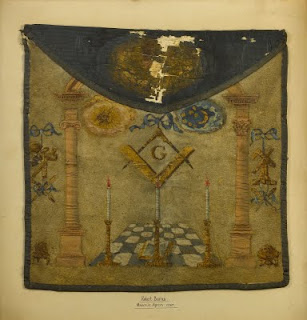 Poet Robert Burns' masonic apron that he received when he joined the Royal Arch Chapter in 1787 is to be sold - and could fetch an astonishing 25,000 pounds.
The lamb skin apron is exceptionally rare in itself, but its association with the great Scots poet makes it hugely valuable.
Burns became a mason in 1781 and was appointed Companion of the Holy Royal Arch at St Ebbe's Lodge, Eyemouth, Scotland six years later.
He was allowed in for free to this particular order of fremasonry because of his poetic genius and an extract from the minutes of the chapter, Land O' Cakes N0. 15, states:
"At a general encampment held this day the following brethren were made Royal Arch Masons, viz Robert Burns from the Lodge of St James, Tarbolton, Ayrshire..."
The apron is decorated with masonic symbols including two columns, a chequered pavement, square and compass, three candles, a sun and a moon.
It is framed in a wooden case and an inscription reads: "Robert Burns. Masonic Apron. 1787."
Current owner Michael Bennett-Levy recalls the apron hanging in his grandmother's flat but now it could be snapped up by collectors anywhere around the world.
He said: "Throughout my life the apron hung in my grandmother's flat and, after her death, in my parent’s home.
"When I inherited it some years ago I did some research, but could not associate it with any of the Scottish lodges to which Robert Burns belonged.
"I did nothing further until February this year when I decided to have it X-rayed.
"The X-ray photos showed clearly the top of an archway under the apron flap and a London Freemason instantly identified it as an 18th century Royal Arch apron."
Jon Baddeley, from Bonhams, who is selling it, said: "Bonhams is delighted to be offering this rare masonic artefact once owned by the Scottish cultural icon, Robert Burns.
"It has remained in the same family since the 1830s and has been to Australia with the family and returned to Britain in the early 1900s.
"It is a very rare piece of masonic memorabilia in its own right, but its association with Burns makes it more important.
"Having been consigned from north of the border, I am confident it will returning to Scotland again after the auction."
Th apron has been passed down the generations of Bennett-Levy's family and has long been a treasured heirloom.
Initially the apron belonged to Michael's great, great grandfather Sir Benjamin Benjamin (Mayor of Melbourne and Senior Mason).
He later passed it on to his son-in law Bernhard Sinauer, who had the valuable piece framed whilst living in Brisbane, Australia.
The item was then repatriated to England following the Australian Masonic schism of the early 1900s and passed down to Bennett-Levy’s grandfather Esmond Sinauer, his daughter Valerie and then finally Bennett-Levy himself.
Burns first joined the Freemasons when he was inducted as an Apprentice at the St David Lodge, Tarbolton, in 1781.
By 1784 he was Deputy Master and, on moving to Edinburgh in 1786, joined the St John, then Cannongate Lodges, Kilwinny.
Two other aprons have been identified as belonging to Burns, but neither was a Royal Arch apron.

The sale takes place on September 30. I understand that the New York Times will be publishing an article about Michael this coming Saturday. 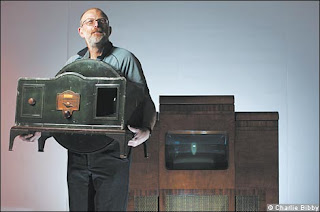 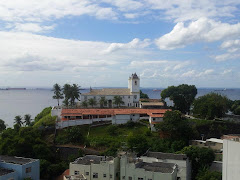 Summer or Winter in Bahia

stuarts brasil
Camacari, Bahia, Brazil
My family for a couple of generations have worked with wood and before this were ceramic artists, I grew up in an environment of everything that you needed can be made. This creates skills that are not ever lost and a mind that is forever forward thinking. My art training was in illustration and early work (12 years) was has a scene painter and special effects, I now paint for relaxation but my families background in cabinet making and architecture have given me the other trade of furniture builder and restorer which I have followed for the last 30 years. I moved to Brazil in 2003, but have also a home in Saint Puy, Gers, France, so my time is evenly split between both countries to work has a furniture restorer/maker and artist/artisan.